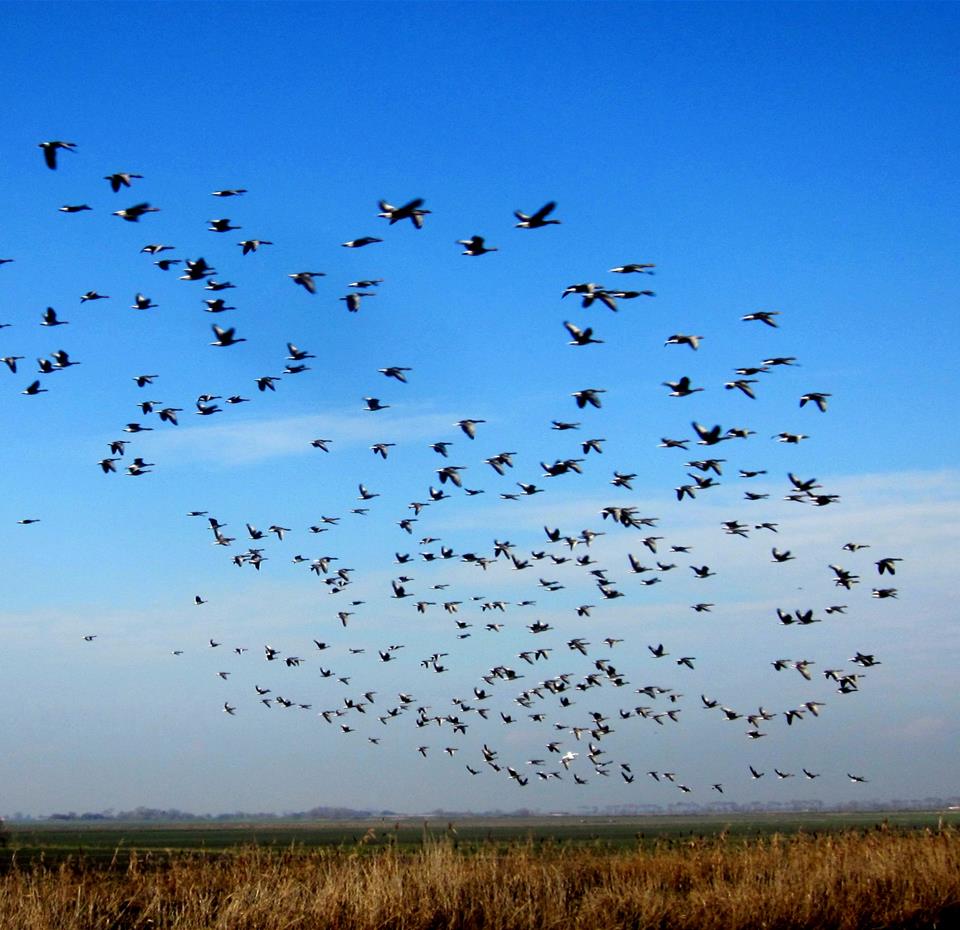 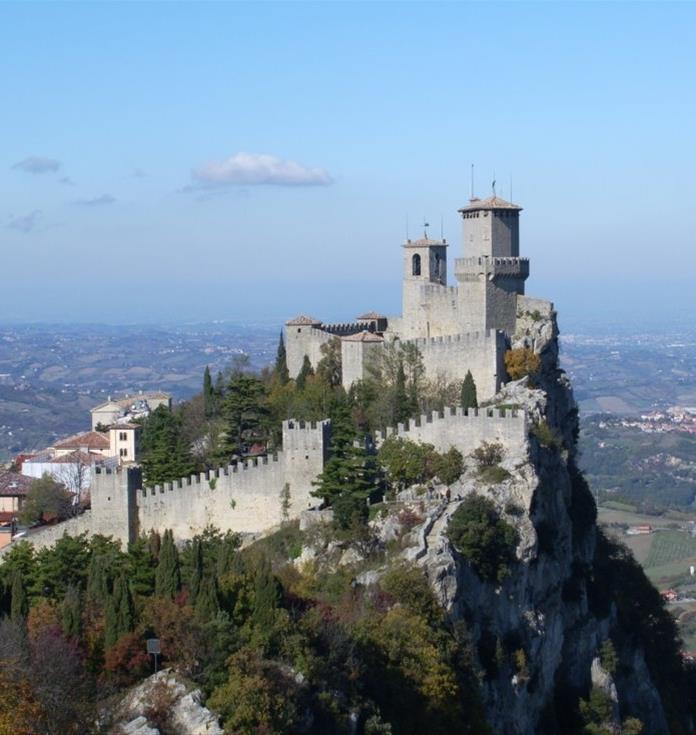 With its hilly an montainous territory of the Montefeltro, the Republic of San Marino, is the oldest republic of the world, ica Repubblica del mondo, with picturesque and breathtaking views. The territory of San Marino in fact consists of nine ancient castles.
San Marino is an independent republic which lies near the Adriatic coast in central Italy, between the borders of Emilia-Romagna and Marche regions. Despite its Italian character, San Marino is very proud of its independent status, which brings in hundreds of tourists and tax-free shoppers every day.
Although the steep slopes, cliffs and castles of San Marino are impressive enough in themselves, what really takes your breath away is the view from the town. On a clear day you can see the Adriatic a few miles to the east, and in other directions the hilly land rises into central Italy. The most famous attractions of San Marino are its defensive towers. Two of these (the Rocca and the Torre Cesta) can be visited with a combined ticket and offer good chances to climb towers and explore ramparts. San Marino's fortifications were restored in the 1940s courtesy of Twentieth Century Fox, who used the republic as a film set for Prince of Foxes, starring Tyrone Power.There are various woodland routes marked out by signs, and if you have time it is worth wandering through the pretty woods, where the natural greenery is such a contrast to the busy streets nearby. For a good short stroll, just head along the main path which follows the clifftop. This leads to the third of San Marino's fortresses, a solitary tower called the Torre del Montale. The building isn't open to the public, but it is another great viewpoint and considerably less crowded. Along the way are various picnic spots and stone benches for a spot of peaceful contemplation. More colourful tourist appeal is to be had from the changing of the guard ceremony (at half-past every hour in the summer months) in Piazza della Libertà. San Marino's principal museum is the State Museum (Museo di Stato), which contains historical exhibits and artwork. There are also the museums of torture, waxworks, weaponry. 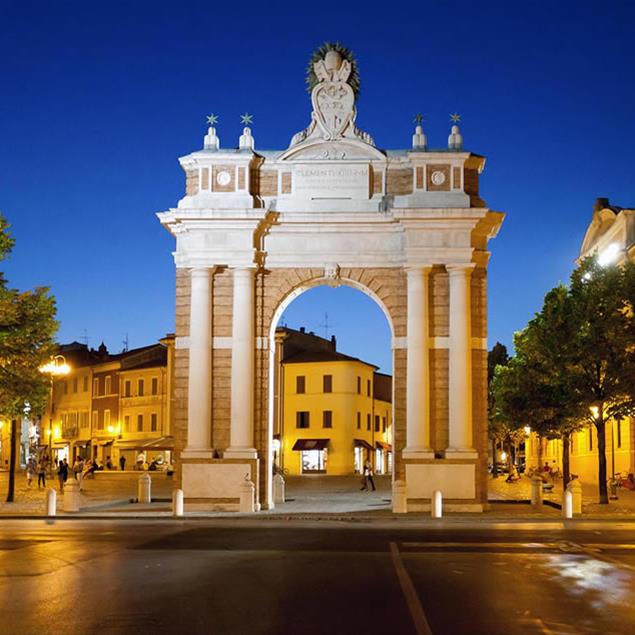 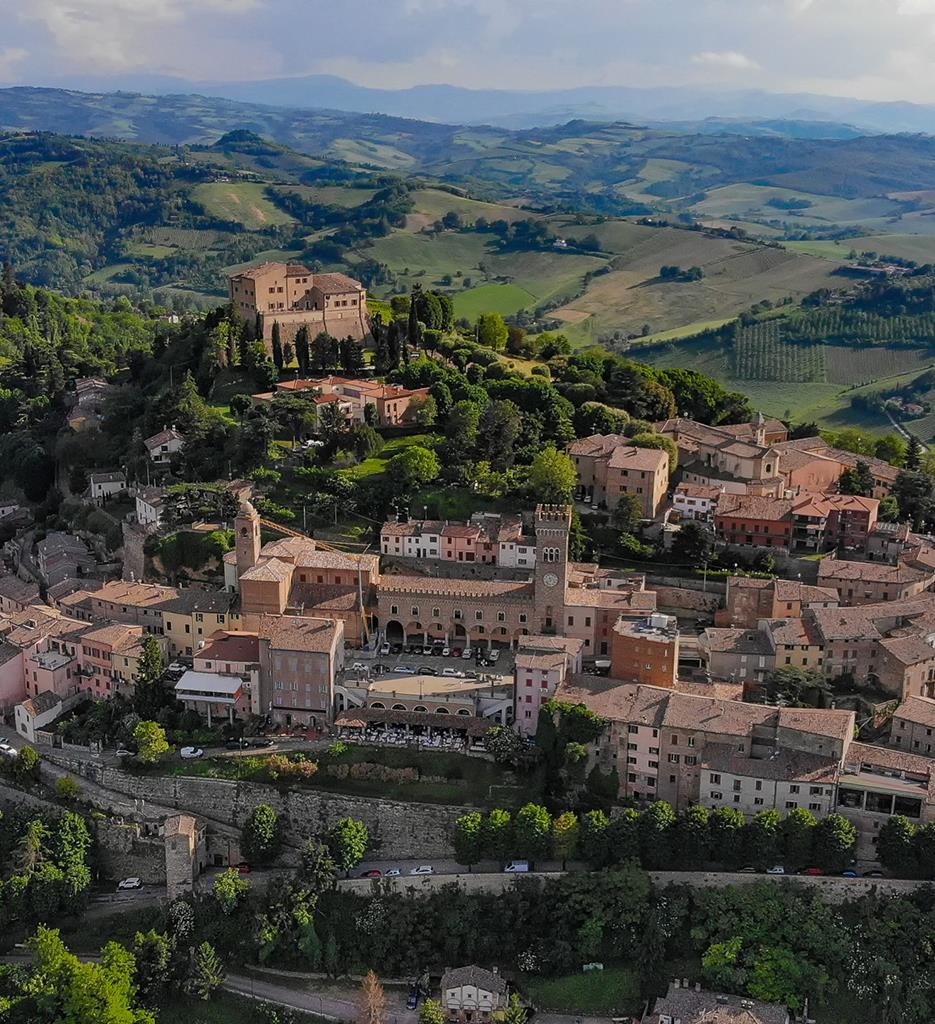 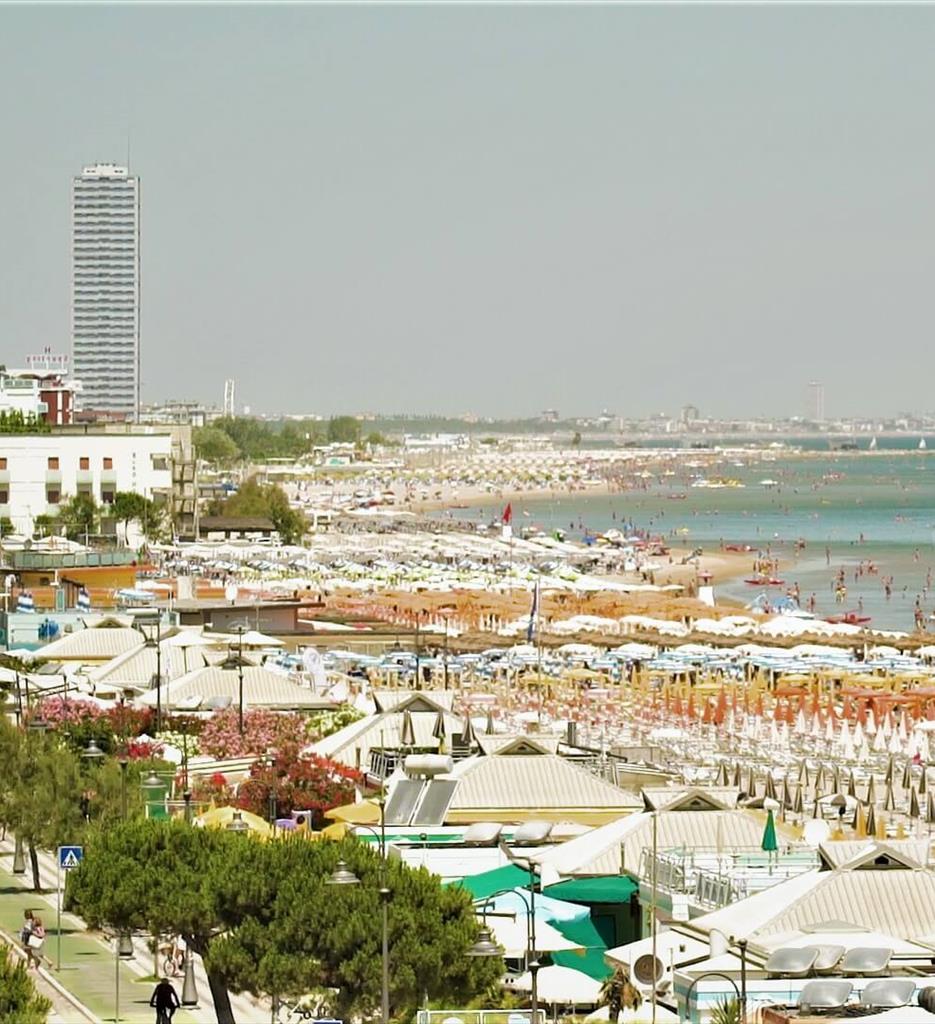 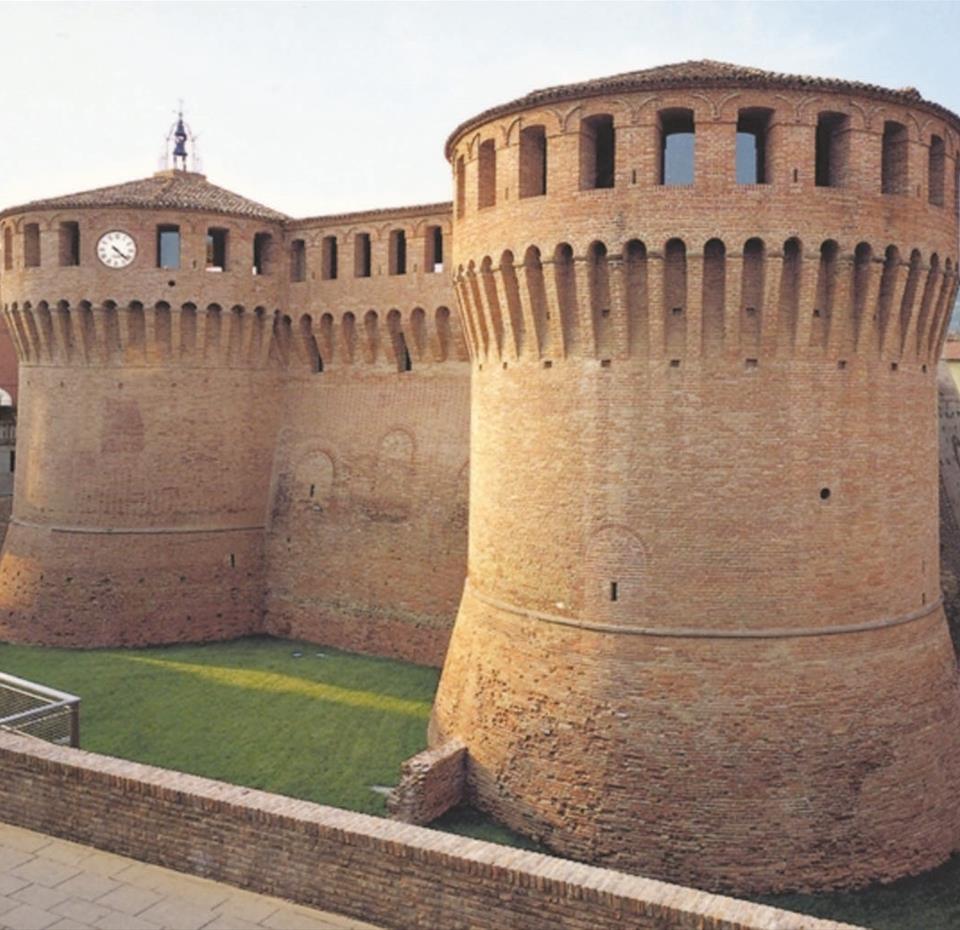 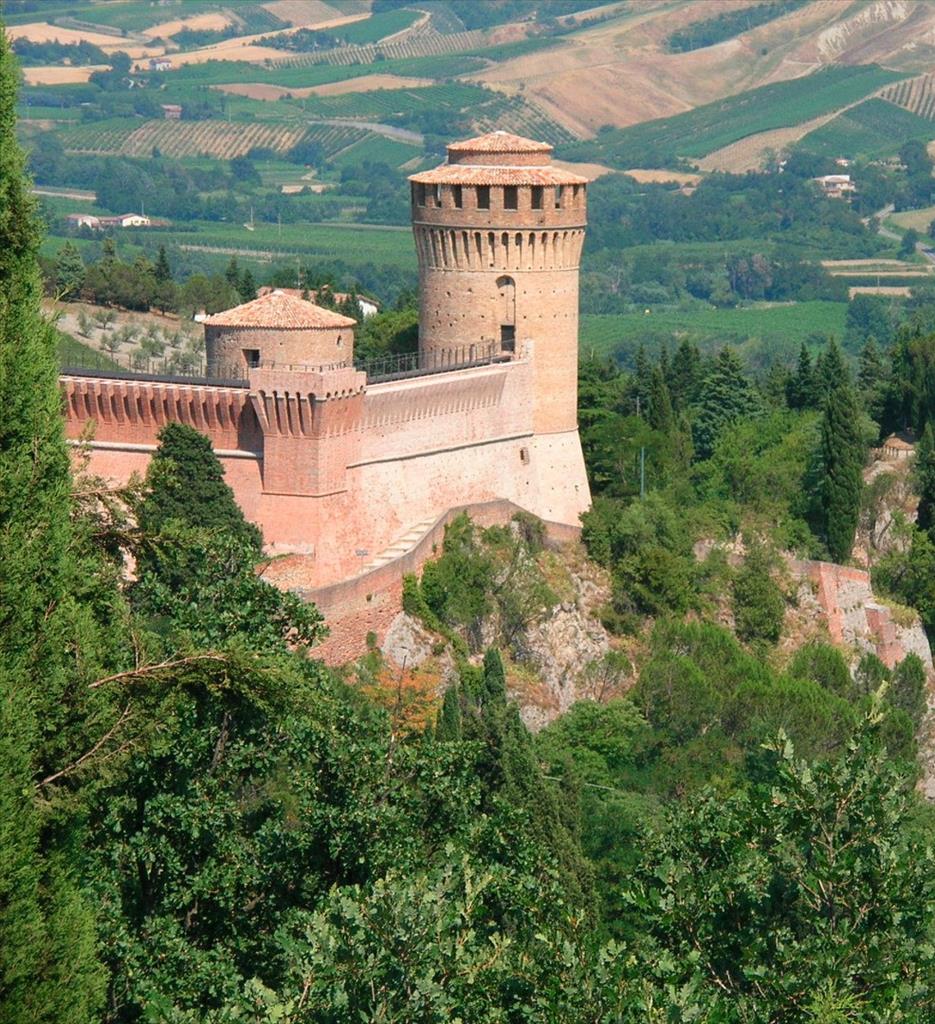 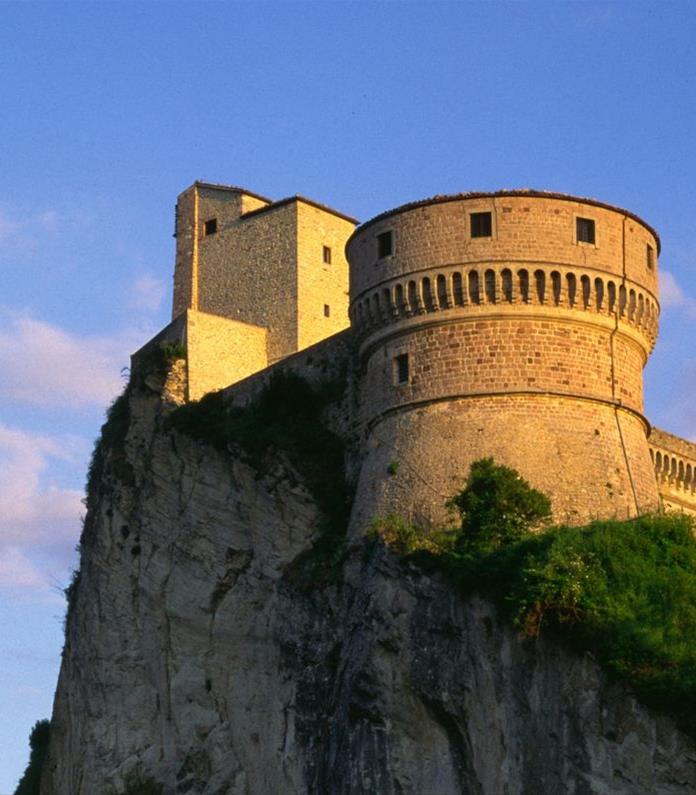 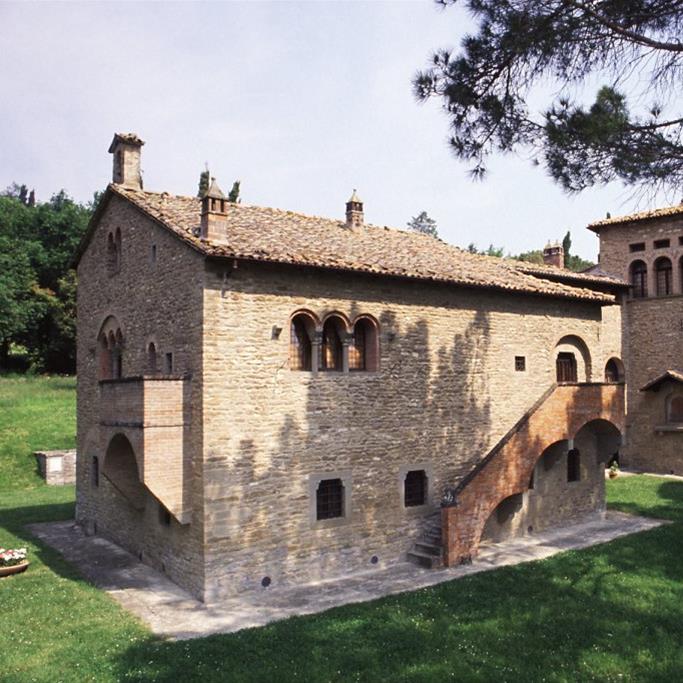 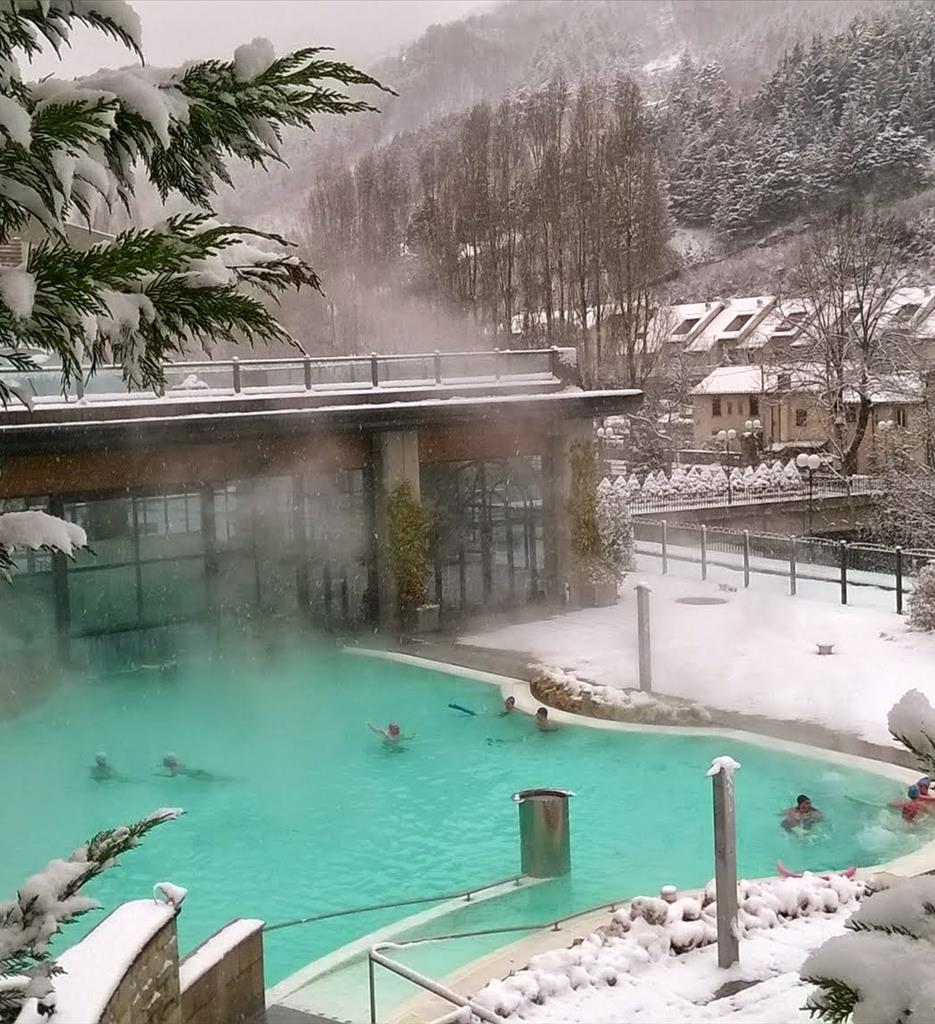 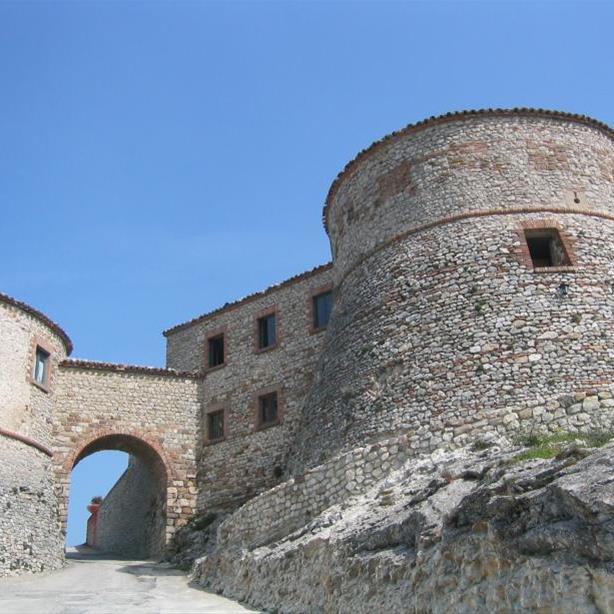 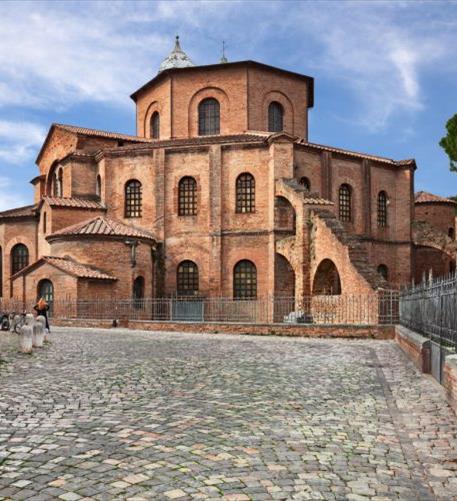 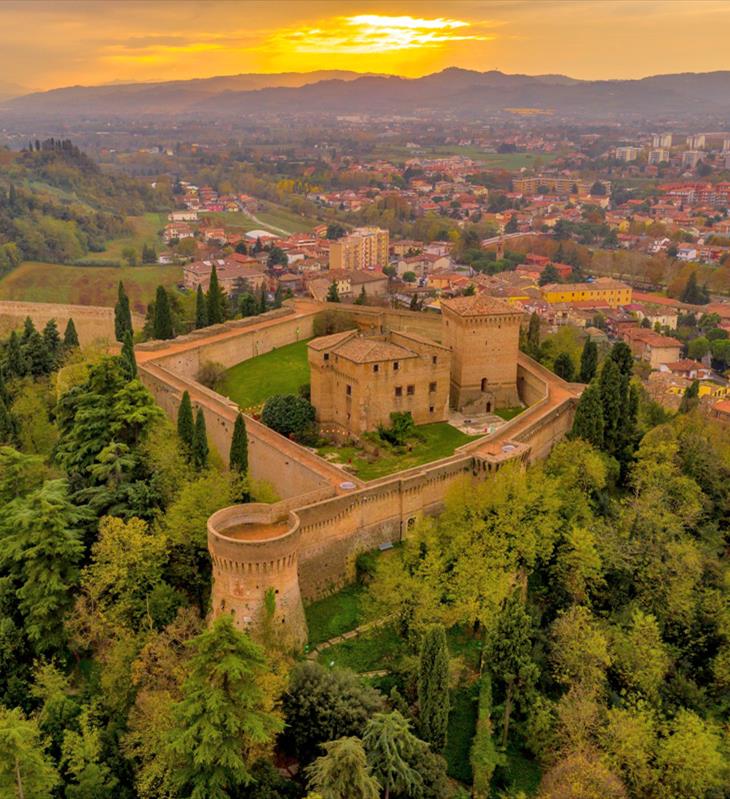 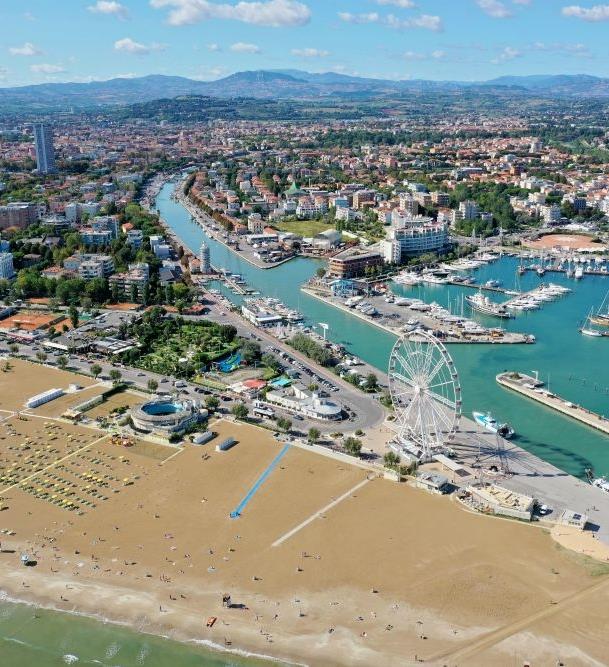 Summer resort of international renown, extends for 15 km along the coast of the Adriatic Sea with hotels, nightclubs, bathing and sports facilities. Rimini is not just a holiday resort on the Riviera of Romagna, but also a city of great historical and cultural level.
The first bathing establishment was built in 1843. Since then, Rimini has been the principal summer resort on the Adriatic Coast and one of the most popular holiday destinations in Italy. Rimini is also a city of notable historical interest. In 390 B.C., Rimini was occupied by the Senone Gauls who established a workshop to coin their own currency. In 295 B.C. the Romans arrived and founded a real colony in 286, Ariminum, that aquired strategic importance. It became a crucial junction for communications; a starting point for the Flaminian Way leading to Rome (220 B.C.), the Emilian Way toward Piacenza (197 B.C.) and the Popilian Way toward Aquileia (132 B.C.). Caesar passed by after crossing the Rubicon (50 B.C.). Also Emperor Augustus (9 B.C.) came this way and had the bridge over the River Marecchia built. The same bridge was later completed by Tiberius, who gave it its name. It was, in fact, to honour Augustus that the people of Rimini erected the famous arch, doorway to the city. After the barbarian invasions Rimini enjoyed a golden age in the 13th century, when it became an indipendent municipality. New constructions such as Palazzo dell'Arengo (1204), Palazzo del Podestà (1330) and new city walls were added to the city. An important school of painting developed, due in part to the presence of Giotto. In 1295 the Malatesta name appeared and belonged to a family that was not only concerned with warfare but was also a patron of art.They beautified the city with works like: the Malatesta Temple, the principle example of Renaissance architecture, and Sismondo Castle. Most of the vestiges of the past are now kept in the City Museum which contains more than 1500 works from the geological development to nowadays.
In Ferrari square, near the City Museum, a house from the Roman period called the Surgeon’s House has been recently brought to light. A small Pompei with splendid mosaics which has already become famous in the world owing to its unique archaeological finds. Here archaeologists have found one of the richest surgical and pharmaceutical equipment of the ancient time. 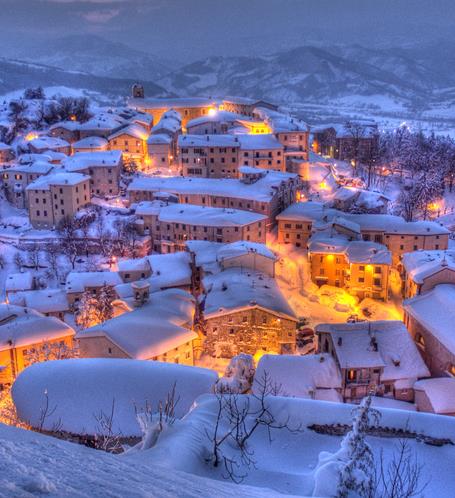 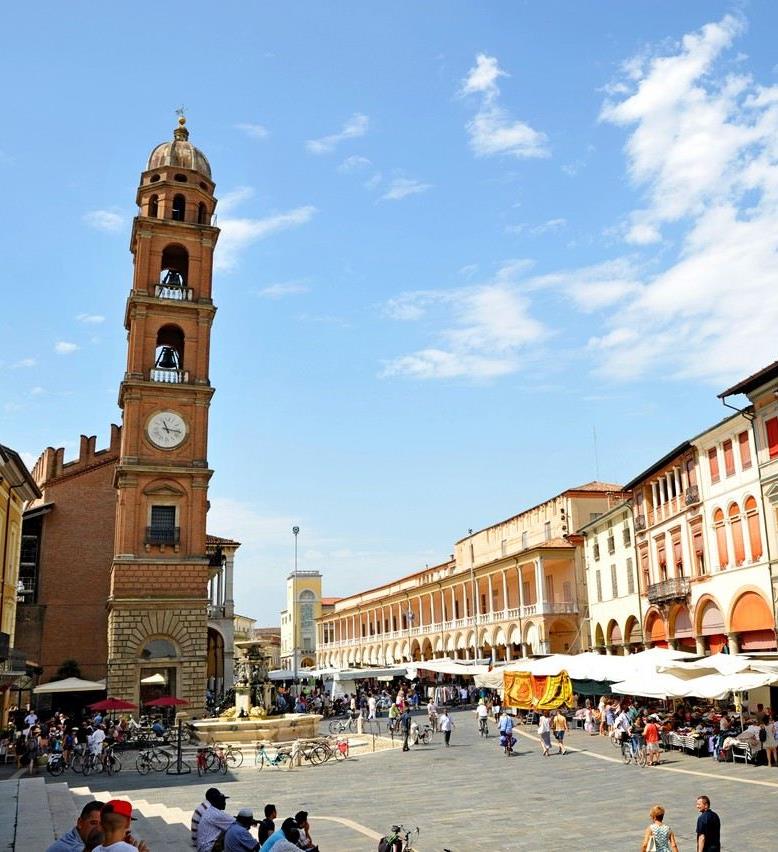 Synonym worldwide for ceramics – the word faience is used also nowadays to refer to majolica in many European languages - Faenza reached a peak of artistic significance during the Renaissance. Here ceramic art has combined the new and the antique and a lively artistic sense can be found in the potters’ workshops, palazzos, urban spaces, art schools as well as in the cultural events that take place all year round.
Faenza, along the via Emilia, is an ancient Roman city. Only a few architectural examples remain of the medieval period, for example: St. Hippolytus and the churches of St. Maria Foris Portam and the Commenda. The same cannot be said for what was one of the brightest periods of Faenza during the dominion of the Manfredi family. In fact, a thriving era began with the rebuilding of the Cathedral in 1474, with the influence of Tuscan renaissance art. Artists such as Giuliano and Benedetto da Maiano, Donatello, the Della Robbia, Biagio d'Antonio of Florence and others moved to Faenza to work. The Baroque period instead boasts many great architectural works that represent the current face of Faenza: the structure of the two main piazzas with fountain, the clock tower, the loggias and the arcade wings of the Palazzo del Comune (Town Hall) and the Palazzo del Podestà. Most of the church convents were then rebuilt in elegant late Baroque style, as were many aristocratic buildings. The blooming neo-classic age at the end of the XVIII century up to the first thirty years of the following century remains the same, with examples of artistic importance through the works of Giuseppe Pistocchi, Giovanni Antonio Antolini, Felice Giani, Gaetano Bertolani, Gianbattista and Francesco Ballanti Graziani, Antonio Trentanove and Pietro Tomba. Amongst the many works, Palazzo Milzetti majestically seals what was the Romagna civilisation of neo-classicism under both an architectural and decorative profile.Faenza's Ceramics
The ceramics of Faenza boasts a tradition of many centuries that also today continues to hold significant importance in artisan and industrial expression. The geographic location of the city makes it a meeting point between the Tuscan and Po cultures, becoming a ceramic centre of primary importance since the Middle Ages. The fame of these products of Faenza is such that the majolica is known throughout the world with the French name Faience. 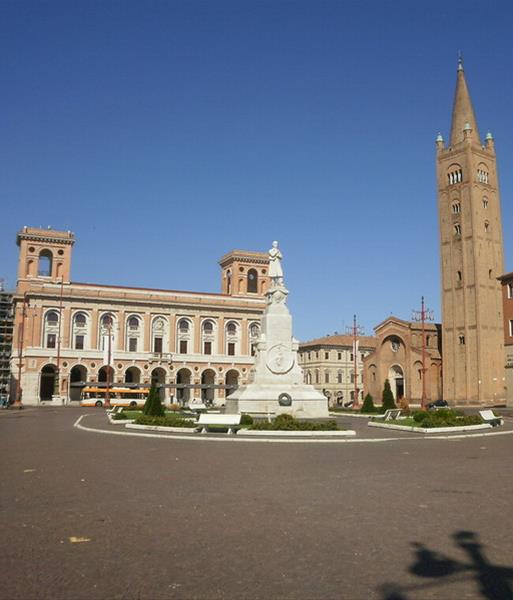 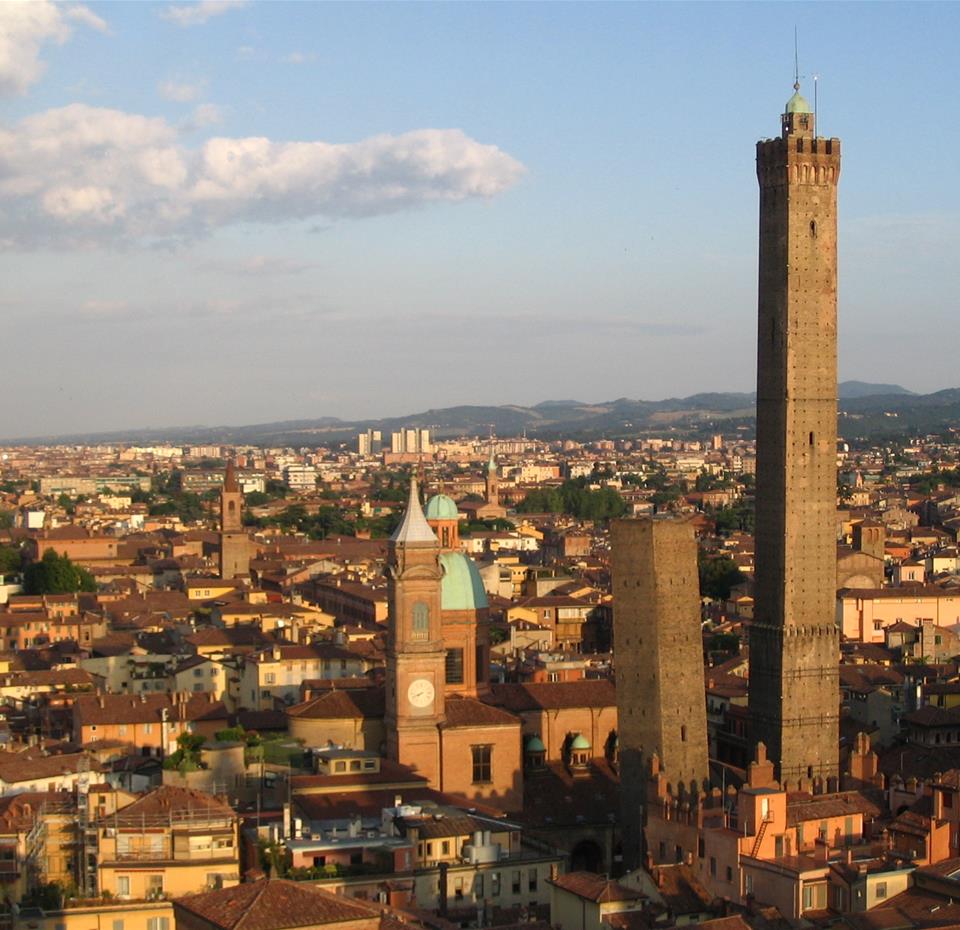